Today we are going to take a look at the Breville Joule Sous Vide, formerly known as the ChefSteps Joule. In our opinion, the Joule is one of the best sous vide machines you can buy today.

If you’re an experienced sous vide chef, or else somebody that’s heard about sous vide cooking and looking to get in on the action yourself, the Breville Joule just might be the sous vide machine that you’ve been looking for.

The Joule is rated as one of the best sous vide machines.. and for good reason!

The real beauty of Breville Joule is that it’s ready right out of the box and works the equipment you have available. Use a pot or another container that you have available, and there’s even no need for you to purchase a potentially expensive vacuum sealer. The Breville Joule is ready right out of the box to revolutionize the way that you use your kitchen.

So, you don’t have to rely on a whole lot of equipment, but the questions is does that mean you have to sacrifice quality? The answer is a resounding no, and that’s clear in every aspect of the Joule.

In terms of physical features, the Joule is 11 inches tall and 1.3 pounds. To give you a better idea, that means that you can count on keeping your sous vide cooker right in a drawer to be ready at a moment’s notice.

Looking good doesn’t count for much if it can’t cook with the best out there, and in this respect, too, the Breville Joule delivers. Its power is whopping 1100 watts, which in technical terms means that it can do just about anything any other sous cooker can do out there and more. To truly minimize the time you spend doing your sous vide cooking, the Breville Joule harnesses all 1100 watts to heat your water to cooking temperature faster than any other cooker on the market.

As any experienced sous vide chef will tell you, sous vide is every bit as much about precision as it is about convenience. This is to say that a heater that’s quick preheating the water, but incapable of maintaining said temperature, is going to result in disaster in the form of overcooked and undercooked food.

One could say the Joule is almost over engineered, but when you’re producing perfection on a consistent basis you’ll hardly feel the need to complain.

The Breville Joule will keep water within .1 degrees Celsius of the exact temperature you’ve set the cooker to. Even after hours of cooking, you can relax thanks to the confidence that comes with knowing your food is being handled with precision.

We mentioned earlier that the Breville Joule works with the equipment that you already have in your kitchen, but the reality is that often sounds too good to be true. The truth is really not so unbelievable when you fundamentally understand how ChefSteps was able to design their sous vide cooker to accommodate your kitchen.

With so many great features, it’s no wonder why so many people love the Joule!

Breville equipped their sous vide cooker with a magnetic base that is every bit as strong as it is ingenious. You can slide and clip the Breville Joule into any pot in your kitchen, which means you can always choose the best pot for the job. If you’re having a dinner party, use the biggest pot in your arsenal to cook it all in one fell swoop. If, however, you’re cooking for one, then pick a smaller pot and save precious counter space so you have room to work.

If you’re still not convinced the Breville Joule is a modern solution to the time constraints of cooking, the free mobile app just may be the thing to change your mind.

The mobile app allows you to control your cooker from anywhere remotely, so you can actually cook on the go, and have a home cooked meal ready for you without the price and hassle associated with eating out each and every night.

It’s not all about control, either. The mobile app also offers guided recipes, so if you can try all the best new sous vide cooking ideas out there using simple to follow steps. If you’re quick to adopt new technologies, the Breville Joule is a must have for another reason: compatibility with Amazon Echo.

For those not familiar with the Amazon Echo, the echo is a versatile modern speaker system that allows you to listen to music, podcasts, organize your life, and even shop using the power of voice control. For sous vide cooking, it means you don’t have to worry about the hassle of washing your hands to operate your sous vide cooker.

Once again, the Breville Joule proves that cooking has simply never been easier.

The Joule is a beautiful piece of equipment that’s full of great features!

One of the greatest things about the Breville Joule is the fact that it is such a modern convenience in every sense. First, the look of the sous vide cooker is enough to take your breath away. The sleek design is enough to have you wondering if it was dreamed up by Steve Jobs.

It’s not all about looks, either. The mobile app that is provided free of charge brings the convenience of smart phones and devices like the Amazon Echo into your kitchen. Once you get the hang of it, you’ll wonder how you ever got on without it.

You shouldn’t have to rearrange your life or your kitchen in order to start cooking using the sous vide method. In all likelihood you probably started using sous vide cooking for convenience after all.

If you don’t live in North America, or else you’re currently abroad and hoping to use the Joule, you may be out of luck at least for the moment.

The Breville Joule is not covered under warranty when used abroad, so use it with care and be sure the device is compatible with the outlets where you’re cooking.

All in all, you’d be hard pressed to find a more rounded best sous vide cooker on the market. It’s a precise piece of equipment that would make a wonderful addition to just about any kitchen.

Whether you’re new to sous vide, or else an experienced cooker looking for an upgrade or gift, look no further than the Breville Joule. You can hop on Amazon, orders your today, and they’ll ship it right your front door.

Not what you’re looking for? Head on over to our super comprehensive article on the very best sous vide machines! 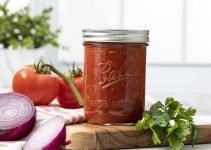