Thanks to a recent Kickstarter campaign, the new SousVide Supreme Touch Plus will be shipping out in May 2018.

Editor’s note (November 7, 2019): The products are shipping to Kickstarter Backers!

While you can no longer get any backer perks, you can still order one for yourself. Before you can order, you have to know what all the hype is about, starting from the most unlikely occurrence.

Sometimes the best things in life happen so unexpectedly that you’re taken back by surprise. This was the case for Michael and Mary Dan Eades – a doctor and nutritionist – when they experienced Sous Vide firsthand in the most unexpected way – hotel room service.

The doctors ordered a double-cut pork chop, expecting a subpar pork chop but instead were utterly confounded by the flavor. The pork chop was by far the tenderest and delicious pork chop they ever had the opportunity to eat. They liked it so much that they couldn’t help themselves from asking how it was made.

It turns out that the cooks were using Sous Vide. This groundbreaking discovery eventually led them on a journey of trying to replicate the experience in their own kitchen. To their dismay, it was incredibly complex, time-consuming, and costly to get their own commercial machine. That led them to finally build their own Sous Vide machine to solve these pressing issues.

That’s when the idea for the SousVide Supreme was born. The Eades wanted home cooks to be able to experience sous-vide cooking with a twist.

Easy to use interface

Their water ovens are not only affordable but energy-efficient appliances that won’t overcook your food. They also offer temperature control down to one degree Fahrenheit (0.5 degrees Celsius) and a rack for positioning food pouches. When you’re finished, just wipe the inside with a cloth. It’s that easy.

If we look at the current model, the SousVide Supreme SVS10LS, it boasts a digital LED display and easy set-and-leave operation. The bath level reaches seven inches and holds three gallons of water, which fits twenty portions of four ounces. Once set, it sits quietly on your countertop and, because it’s designed with double-wall insulation, it’s safe to touch.

The smaller model, the SousVide Supreme Demi SVD-00101 is the size of a bread machine. It has the same features but holds 2.3 gallons of water. It holds twelve portions of four ounces and is still large enough for roasts and legs of lamb.

These water ovens take the convenience and safety of sous vide cooking to the next level. You set it up and leave it on the countertop, and you don’t have to worry about water level or temperature once it’s set. There’s also no concern about someone burning themselves when accidentally touching or brushing up against it.

What’s New in the SousVide Supreme Touch Plus

The upcoming SousVide Supreme Touch Plus retains the design features of the current models. They’ve kept what cooks love about the machine while improving and adding a few features, making it their best sous vide machine to date.

The most exciting addition to the SousVide Supreme Touch Plus is the portable integration technology. Connect the machine to your home Wi-Fi, and you can control the temperature remotely. This works great if you’re outside in the garden or upstairs watching TV.

Amazon Echo and Echo Dot can also connect to The SousVide Supreme Touch Plus. If your hands aren’t free, you can ask Alexa to turn the machine on.

The SousVide Supreme Touch Plus will have an accompanying app. You can join an online community to find recipes to program into your machine. You will also be able to share any photos you have of the finished meal to various social media platforms.

Sometimes, it’s the little things that make a great product. The SousVide Supreme Touch Plus adds a transparent lid, allowing you to see your food’s progress without releasing heat by removing the lid. The new touch screen will be water resistant, which makes cooking with water that much easier. It will also keep the double-wall insulation but use less energy than current models.

It’s worth finding the space on your countertop for the SousVide Supreme Touch Plus. You don’t have to hunt for parts, and it’s easy to set and walk away. With the new features, you can monitor your food while in another room or out of the house, ensuring it’s cooking at the correct temperature.

Not what you’re looking for? Head on over to our super comprehensive article on best sous vide machine reviews and sous vide vacuum sealer reviews! 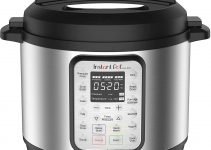